Organic π-conjugated polymers are used as the active components in thin-film solar cells, light-emitting diodes, and transistors. Advantages include tunable optical and electrical properties and the ability to be solution-processed onto large, flexible substrates. For decades the synthetic routes to soluble π-conjugated polymers were dominated by transition-metal-catalyzed step-growth polymerizations. As a result, little control could be exerted over the resulting polymer length, sequence, and distribution. This landscape changed dramatically in 2004, when McCullough and Yokozawa independently identified a living, chain-growth method (now referred to as catalyst-transfer polycondensation (CTP)) for synthesizing poly(3-hexylthiophene). These initial reports ignited a flurry of activity in the field, and more than 150 papers using CTP have been published since 2004. The current challenges include narrow substrate scope, slow precatalyst initiation, and competing side-reactions (e.g., chain-transfer and chain-termination). Our group’s approach to overcome these challenges has involved elucidating their mechanistic underpinnings and utilizing this insight to develop new catalyst systems. 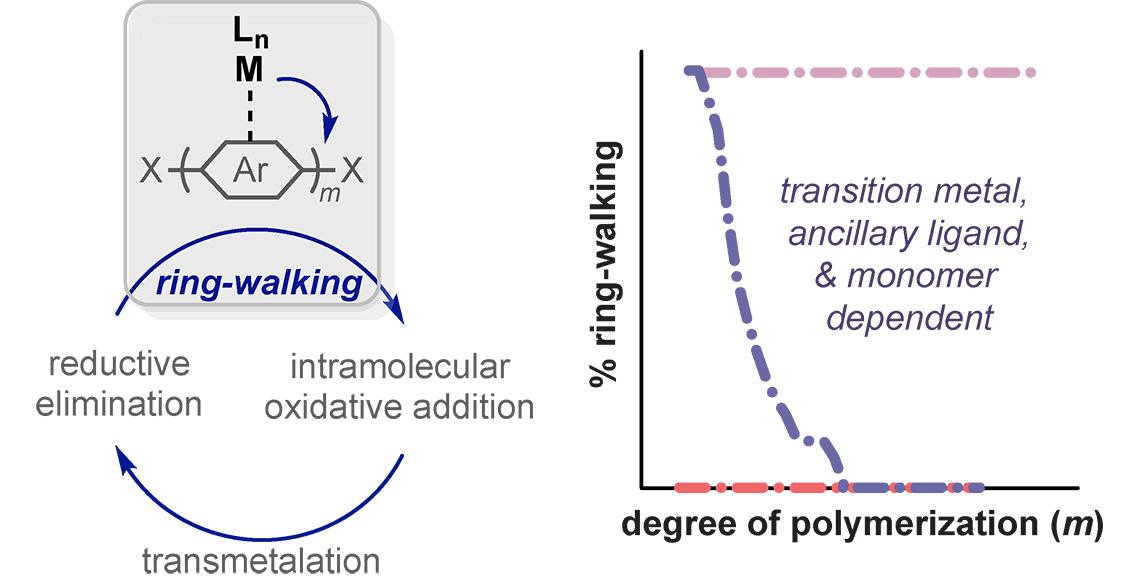 Little is known about the effect of conjugated copolymer sequence on the physical, optical and electronic properties because these materials have largely been synthetically inaccessible. The ability to tailor properties by simply altering the copolymer sequence should provide a powerful new design strategy for preparing the next-generation of tunable organic materials. We have been targeting gradient copolymers, which exhibit continuously changing composition along the polymer chain, because of their anticipated ability to stabilize polymer blends. We anticipate that these novel copolymers will exhibit unique physical, optical and electronic properties when self-assembled in the solid-state and in polymer blends. Our group’s approach has involved copolymerizing thiophene/thiophene and thiophene/selenophene co-monomers, investigating their unique solid-state structures as well as their ability to compatibilize polymer/polymer and polymer/small molecule blends. We also have a strong interest in expanding the diversity of monomers that can be copolymerized in a controlled fashion to access more electronically dissimilar gradient copolymers.

Block copolymers, which consist of two or more chemically unique polymer chains joined together via a covalent bond (or noncovalent interaction), are being explored for a variety of applications, ranging from membranes to photonic materials. Block copolymers containing both conductive and insulating segments are less common, but have promise in organic electronic applications where phase separation can lead to improved performances. Current synthetic approaches to these conducting/insulating block copolymers require several post-polymerization transformations, which result in lower yields and challenging purifications. A streamlined synthetic approach can be envisioned using a multitasking catalyst, wherein a single catalyst mediates both polymerizations in a single pot. Current research in our group is focused on identifying multitasking catalysts and synthetic conditions to access conductive/insulating block copolymers in a single pot. 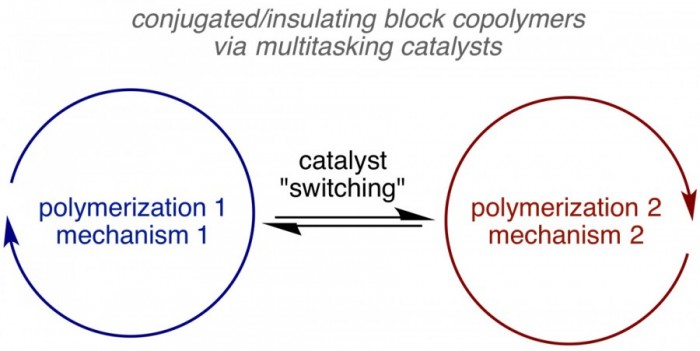 Molecular gels form through the self-assembly of small molecules into supramolecular structures that immobilize the solvent via capillary forces and surface tension. This self-aggregation is driven by noncovalent intermolecular interactions. As a consequence, changes in the local environment can be used to modulate the gel/solution dichotomy. Physical interactions among the large aggregates and with the solvent give rise to the macroscopic gel properties. Gelation is both a complex and poorly understood process; understanding which molecules will form gels and under what conditions remains a significant challenge. The majority of new gelators are discovered serendipitously or through extensive combinatorial screening methods. Our group’s approach has involved developing tools to streamline the discovery of new gelators, guided by insight gleemed from structure/property relationships in gelation, and identifying new gelators for specific applications. Our latest work in this area involved developing a sensor for Pb contamination in paint. This work was featured in numerous news outlets, and the original press release can be found here. 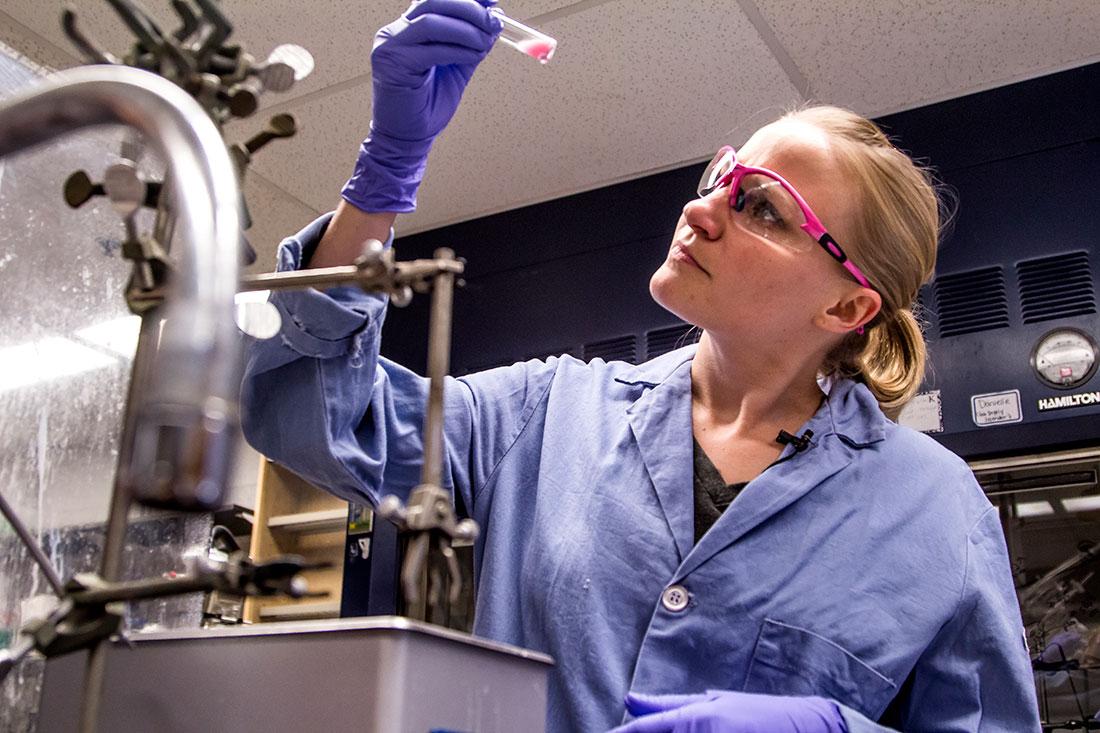 A new area of research in our group is designing approaches to amplify chemical signals through gelation to obtain macroscopic readouts of microscopic events. We are particularly inspired by the slime produced by hagfish, wherein remarkably low concentrations of insoluble protein fibers (0.002 wt%) combine with similar amounts of a soluble protein to immobilize up to a liter of water in less than 1 s. Our group aims to generate a chemically analogous system, wherein water-insoluble polymers (or small molecules) are released from capsules and combined with a water-soluble component to form a local or global hydrogel. In addition to providing a visual indication of where capsule release has occurred, gelation can also serve to interrupt particle translocation. We are also developing new, functional polymers for use in triggerable microcapsules.

This research project is a collaborative effort between members of the Center for Autonomous Chemistry (CAC). Founding members include Sankaran Thayumanavan (UMass Amherst), Tim Swager (MIT), Jeffrey Moore (University of Illinois Urbana–Champaign), Vince Rotello (University of Illinois Urbana–Champaign), and Anne McNeil (University of Michigan). The CAC draws inspiration from the complex, self-regulating behavior found in many biological systems. These systems are fundamentally chemical in nature, where molecular-level signals effect large-scale changes. By capitalizing on our knowledge of complex chemical phenomena, such as self-assembly, microencapsulation, molecular recognition, and signal amplification, we envision rationally designedself-regulating chemical systems. The CAC seeks to uncover the key factors that underlie autonomous behavior and to translate this knowledge to new technologies in numerous diverse areas, including diagnostics, sensing, self-healing, and drug delivery.